Name on side of the boat

Name on side of the boat

Was interested in putting the name on the side of my boat after peer pressure from my wife.

I don't want it to look tacky and gaudy. I was thinking maybe script and on one side and towards the stern?

What size would you go with anyone have any suggestions on where to buy? or have some pictures. Google hasn't been great at finding stuff.
Top

I like a clean look. Just the Whaler logo and stripe. All should be red. A non-red Whaler logo and stripe, to me is like a Philly Cheese Steak without Cheez-Whiz. I personally, like Forrest Gump, named my boat after the love of my life. I put the name on the stern. This is very opinionated, my opinion any agreement/disagreement welcome.
Current: 2017 Everglades 295cc, Previous1: 1995 Boston Whaler Outrage 21, Previous2: 1974 Sevylor Caravelle 3-man liferaft.
Top

I am thinking maybe along the side? What size you think?
Top

- put it on outside the transom.

For those with a nice flat transom, classics and Montauks for example, a name on the transom looks just fine. However, the "euro-style" transoms, Dauntless for example, don't permit enough flat space for showing a boats name.

We see that many commercial boats sport their names on the bow area. Many other boats use the after portion of the hull. Our boats are named but not labeled. If The Admiral demanded a name on the boat when we had a Dauntless I would have chosen a modest size with the same color and type style as used for the Boston Whaler logo below the logo.

It would not be "old school" but could look appropriate to the boats style.
Butch
Top

Boat lettering is an art that now can be done by a computer.
With smaller boats like ours the transom is preferred and looking at our transoms you know you can't put 12" letters on it to spell something out with the OB in the middle.

I behooves you to keep letter size in scale with boat size. All our smaller (<25ft) are registered and not "documented" and therefore looking at your 3" registration numbers that would be a pretty good size for your "port" name and the boat name I would say no larger than twice that. But all is in the eye of the beholder. Just my 2c worth.

Due to our boats being registered we have registration numbers on our bows and therefore there is no room for a bow name like you see quite often on documented vessels together with a transom name. The back topside of our hulls shows the Whaler Logo and in the center most often the model and/or size. For those reasons I would not put a name on the size but you could hang a name board from your railing as mentioned by Phil.

side note: msirof2001 I have a 50 year anniversary edition Whaler that came with black logo and lettering and not RED and is as Boston Whaler as it can get. Because of that I got a black sun-top/bimini and a black complete cover and black mercury engine, all OEM. I therefore opted for nice black Clumsy Cleat lettering on my transom.
EJO
"Clumsy Cleat"look up what it means
50th edition 2008 Montauk 150, w/60HP Mercury Bigfoot
Top

Regarding naming a boat, I have another good story:

When the White Star Line and Cunard Line merged (under pressure from the government) in the 1930's, they began construction of a new trans-Atlantic liner, known only by the builder's hull number. The intended name for the ship was kept a secret.

According to the legend, the head of the combined company was visiting the King of England, George V. The King was most interested in the name for the new ship his government was helping to finance. Faced with this question, the head of the shipping company told the King, "Your majesty, we intend to name the ship after England's most beloved Queen."

This somewhat vague response was allegedly a reference to the ship name to be VICTORIA, in honor of Queen Victoria, who had earlier reigned with great popularity for 63-years. Of course, the name VICTORIA ending in "-ia" would have been a perfect fit with the prior Cunard Line names.

King George then replied something along the lines of, "Excellent, I shall tell my wife." His wife, of course, was Queen Mary.

At the launch ceremony, the legend goes on to say that when the Queen stuck the ship's prow with the bottle of champaign, she then said, "I name this ship QUEEN MARY." And then added in sotto voce, "That's right, isn't it?"

The takeaway from this old legend: better name your boat after your wife if you plan on giving the boat a woman's name.
Top

I believe one should do whatever makes one happy, since all vinyl letters can be easily removed if the boat is to be sold or you want to change the name. It is nice to have a name that means something to you (the owner, wife, or owner's family). Boat naming can be an artistic endeavor, with colors, styles of font, and even pictures now available. I am partial to names on the side of the boat. Wisely, as Jim H suggests, my Revenge 19 sports the name "KUKANA" in big black block letters. The significance of this is that it is Hawaiian for Suzanna, and my wife and I bought the boat in Honolulu and her name is Suzanne. I have a Harpoon sailboat and the name on the transom in red letters is "CONNIPTION". The origin of the name is my mother's reaction to heeling over while sailing...she always had a fit when the lee rail was near the water. I chose a different tack for my Revenge 22. The name on the side in electric font, red with black borders, is "MAKE MY DAY" ...obviously in deference to Clint Eastwood's famous line in his Dirty Harry movie. I have had many positive reactions and thumbs up for this one.

So have some fun and do what you want. Names that play on words can be shopworn, but there are clever ones too. One of the simple names I really like is "GOOD BOAT". Perhaps my next Whaler restoration will bear the name "NOT HALF BAD".

The same size, color and font as the "Boston Whaler" on the side about midway between the harpoon stripe and the waterline.

I also had the registration number in the same color and font as the logo but used the size the state likes, I believe it was three inches.
Butch
Top

ALAN G wrote:I believe one should do whatever makes one happy, since all vinyl letters can be easily removed if the boat is to be sold or you want to change the name. It is nice to have a name that means something to you (the owner, wife, or owner's family).

Alan
Yes it is true, names on boat can be artistic and quite often have a significance, as did most of mine, one of a kind and never found on another boat.

After my kids were born I put in approximately 2200 hours in restoring an old Chris Craft 27ft Sea Skiff. The boys 5 & 6 loved boating and we went out often on other boats I had. The wife said I was crazy to put so much effort, work, and money in an old boat. We asked the kids to name it before re-splashing her. The said "Dad gone crazy, Mom gone mad, Kids plain happy" This of coarse was too long of a name and we ended up with "Dad Gawn Crazy". This name was painted in gold leaf lettering on a 9 ft wide mahogany banner that was mounted on the mahogany transom. That name followed 3 consecutive restored Chris-Crafts cabin cruisers. (unscrew banner and screw on next boat).

Then our sailboat shared with some good friends we named "Sailmates" again a meaning.

Last but not least we had some difficulty naming the little Boston Whaler as we didn't like "tender to" or "little xyz" so my wife came up with "Clumsy Cleat" and not because of my clumsiness but because of the reference it makes to whaling.
Named by her not after her but everybody is happy. We get a lot of thumbs up and/or requests as to what it means.

Google it, but in simple terms: In the forward thwart was the knee brace or clumsy cleat to steady the left thigh of the harpooner. When the forward oarsman, usually called the boatsteerer, got the call, he stood, braced his leg in the “clumsy cleat” notch near the bow, and darted his irons into the whale.
EJO
"Clumsy Cleat"look up what it means
50th edition 2008 Montauk 150, w/60HP Mercury Bigfoot
Top

I see lots of Whalers with their names on the sides and I very much like the look. I have used boatus.com for the graphics on three of my boats. They have a little design studio online where you can try various fonts and colors to get the look you like. I believe they also give you an overall height and length so you can gage how it will fit the available space. The vinyl is good quality and installation is fairly easy. The graphics come with installation instructions. We have our boat’s name (Equinox) on both sides. Amazingly, I do not seem to have a picture of the side of my boat on my phone but the letters are 5.75 inches high. My wife is a designer and came up with a fairly simple design. Our Montauk 170 has the blue logo/stripes so the letters are that same blue with some little gray stripes. Block letters.

Next whaler I want the tan hull with red logo/stripes. I would like to go with a more subtle name on the stern if the stern has enough flat space, but I'm happy with what we did for this boat.

Script is almost never a good idea in my opinion.
Top 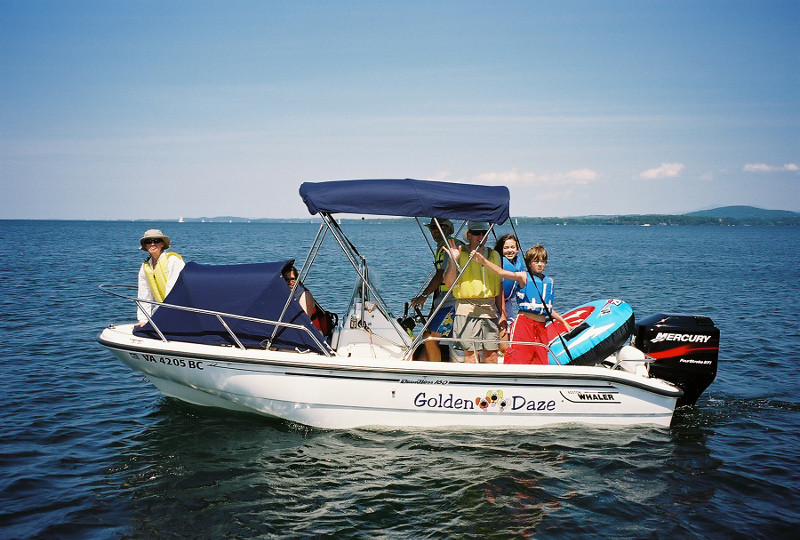 For any boat that spends a considerable amount of time outside, I'd put the name on the transom. Over time, oxidation, wear and other factors can make the name permanently visible in the gelcoat after removal, even with a strong compounding an waxing. Dark colors are more susceptible, but even the lighter colors do exhibit this "ghosting" of the removed name decal.