by dtmackey
Was moving a bookcase tonight and noticed one of my old project photo albums with some old Whaler projects. There were more, but this is all I have pics of.

I purchased this 13' Whaler just before moving to Japan in 1988 while serving in the Coast Guard and patched the damage before flying out. 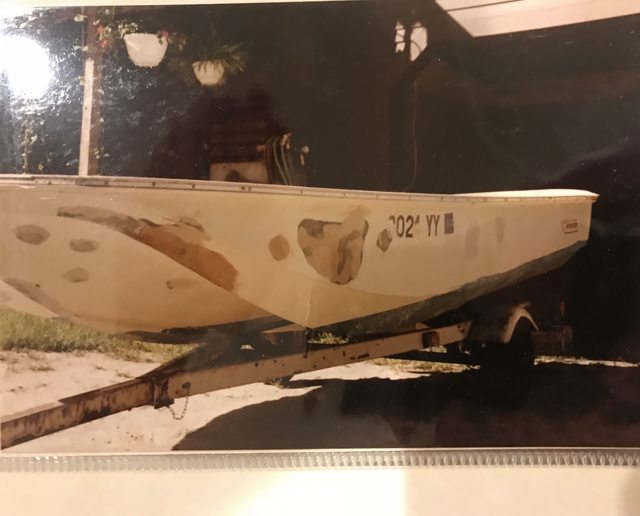 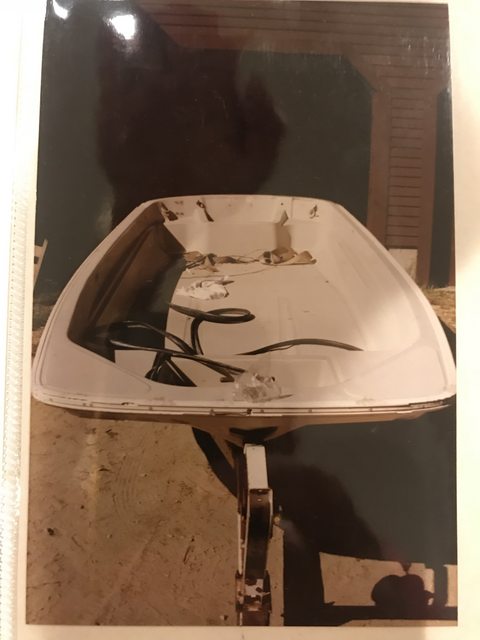 Arrived back in the U.S. 2.5 years later and finished the project and bolted the 25 Evinrude on that it came with, but wasn't happy with the performance. 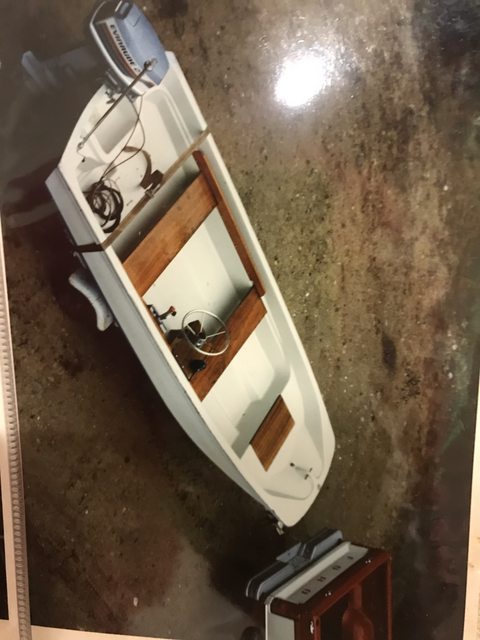 I ordered a brand new Evinrude 40hp and it was a different boat. 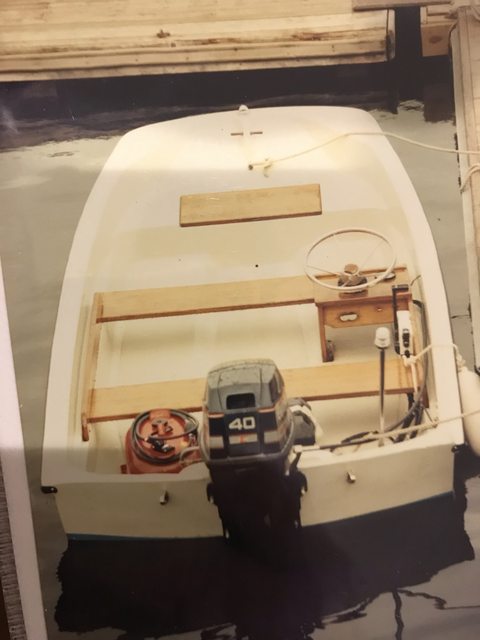 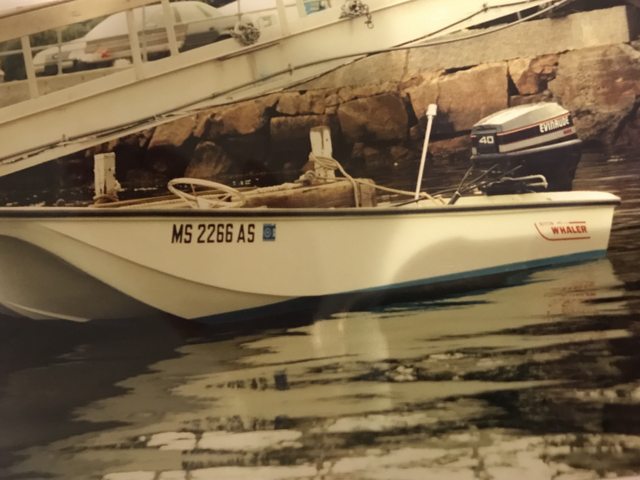 Some years later(1991) Hurricane Bob threatened New England and even though it was downgraded to a topical storm while passing over Cape Cod, it still packed a severe punch. I remember a good friend with a 17' Whaler Montauk in pristine condition, he went to pull his mooring kept boat before the storm, but the battery was dead, so he made sure it was secured to the mooring and hoped for the best. Well, 1/2 way thru the storm I received a call that his mooring dragged to the rocky shore and was pounding on the rocks. I grabbed his trailer and headed to the beach where the boat was with a F250 4X4 and drove through a park and onto the beach. My friend was in the water trying to steady the boat and was very lucky that he wasn't crushed between the boat and the rocks. I had 150' of line, so he came in and grabbed the bitter and made his way back out and was able to secure it to the norman pin as the boat continued to slam on the rocks. The boat had rolled several times and we waited until it rolled upright and then used the truck to drag it over the rocks and onto the sandy beach. The boat was a mess. Console and rigging were gone. Mercury 90 (tower of power) was missing the lower unit, cowl and was smashed to bits. The boat itself was a total mess and badly damaged. The seat was ripped from the boat, but we recovered the legs and teak pieces in good condition with little damage.

Two weeks later I called my friend and asked if he'd sell me the boat and he had already sold it for $400 (boat trailer and whatever was left), I was too late.... About a year later I met someone who mentioned their father had a damaged Whaler in the backyard and was looking to sell. I drove over and it was the same boat, less the trailer. Apparently he bought the package and only needed the trailer. I was happy to pay $400 for the Whaler remains and my project started. 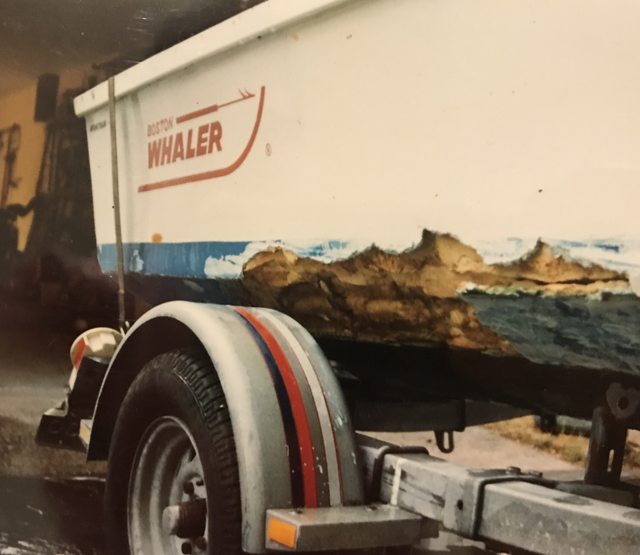 Whaler uses poly line in the gunnel for the gunnel rivets to grab into. 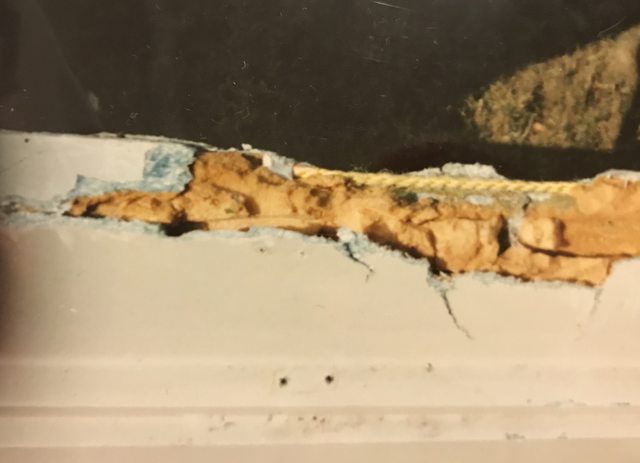 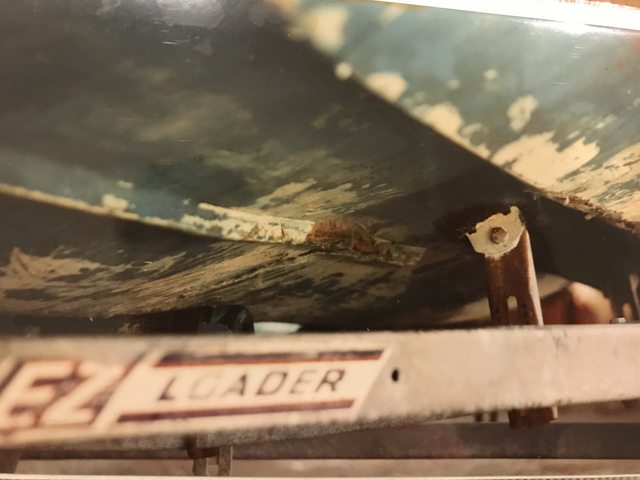 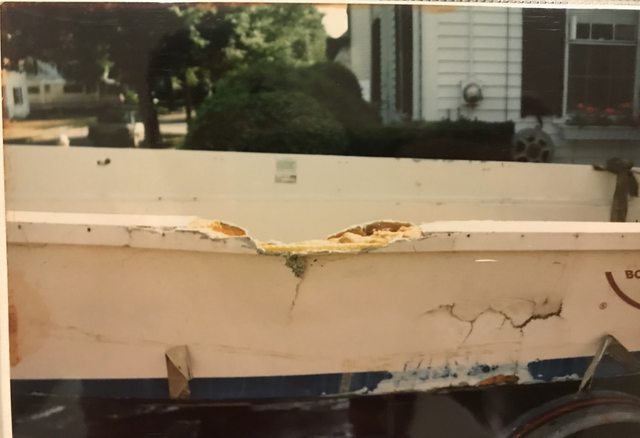 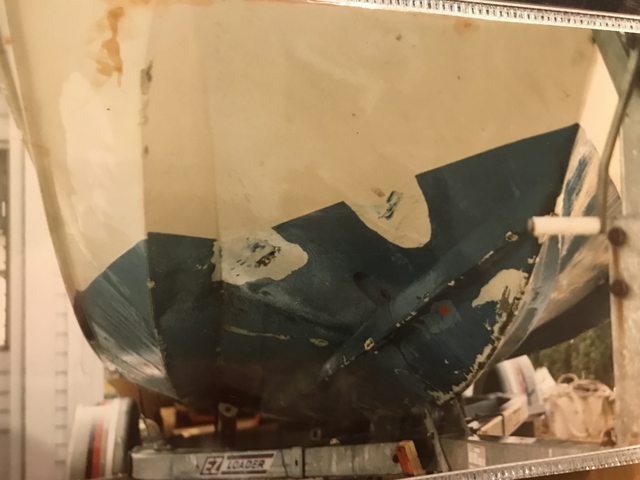 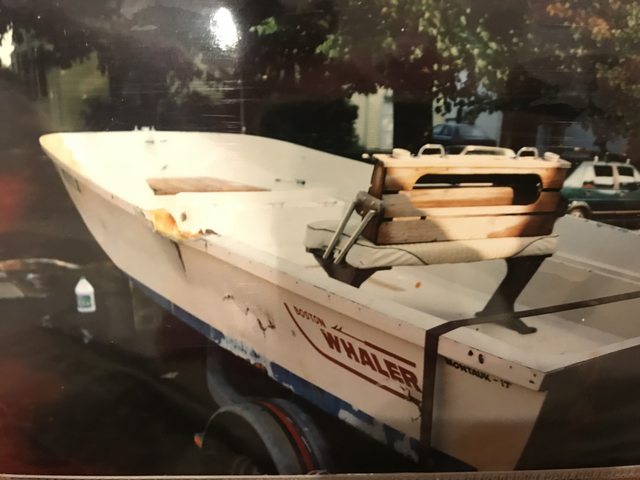 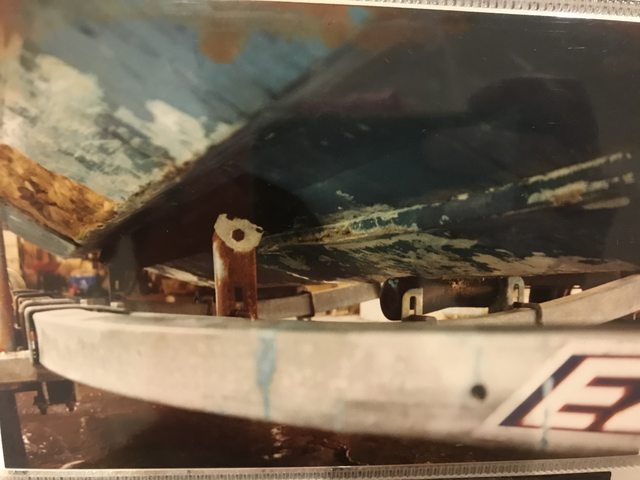 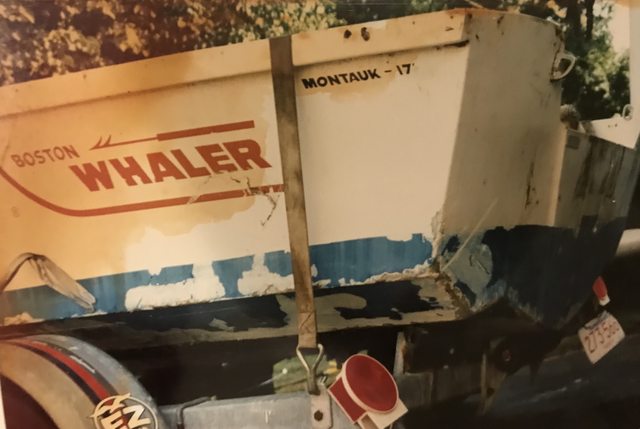 Because the boat pounded on the rocks for hours, there were many soft spots where the foam was crushed and the fiberglass rebounded, but other areas were ripped clean though. The good part was the boat was dry after sitting for a while and the overall shape was worth saving.

I spent about a year and took my time on the boat since the boat needed a gunnel to gunnel repair, among many others. Strakes and foam in the hull had to be replaced since they were gone or crushed. 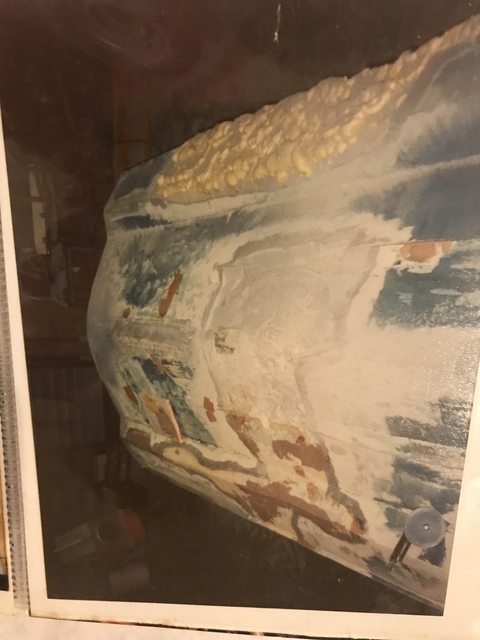 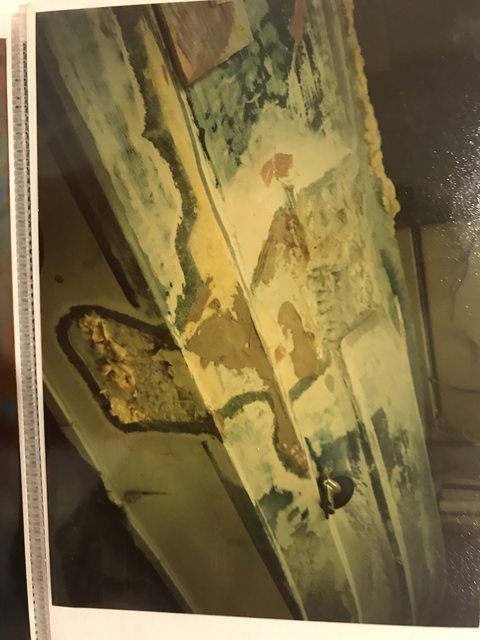 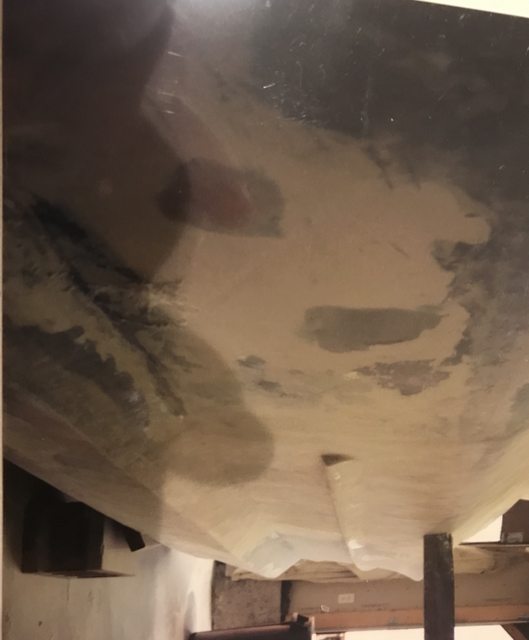 Gunnel repair required more support, so I foamed and glassed in mahogany that provided better support then the day it was built. 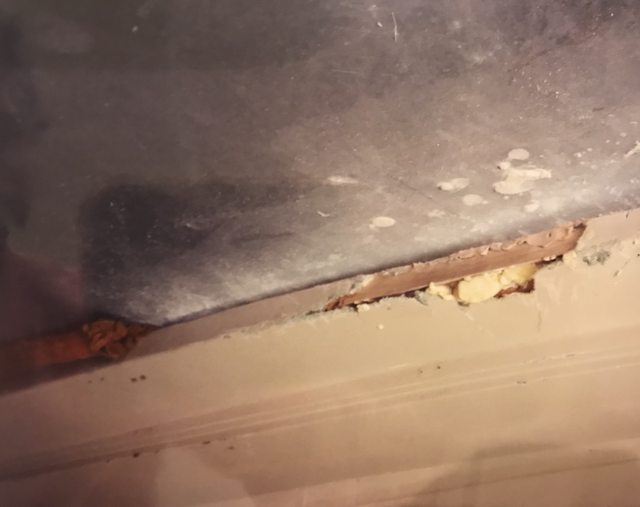 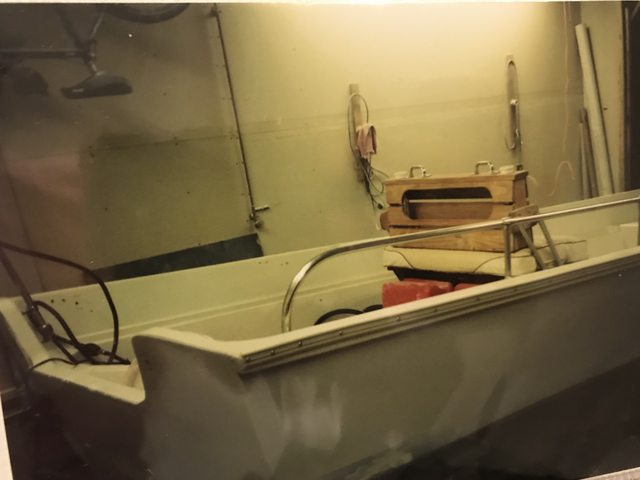 And getting closer to white Imron. 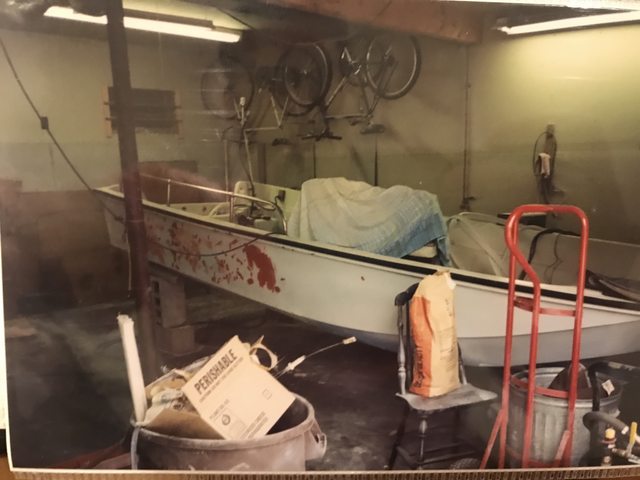 The following summer the boat was ready for water and solid. 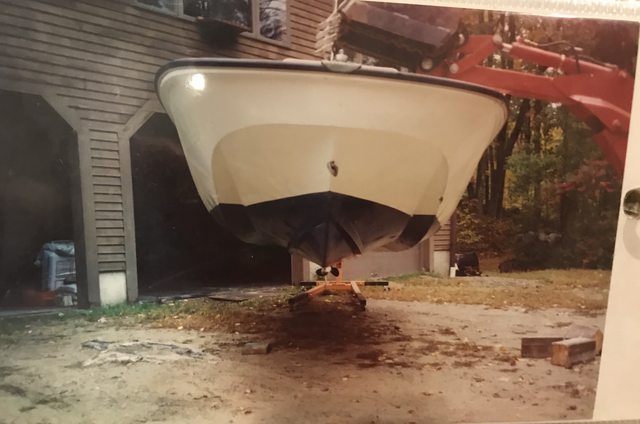 Since the console was ripped from the boat and a new one was far too expensive, I measured the stock console and build a oak frame and covered with 1/4' plywood and then dropped it off at a local boat builder to glass up (I didn't have the time). Once done, I primed and painted with Imron to match the interior. I bent the console rail and bought a piece of smoked plexiglass and cut to size and heated and bent to fit. It looked the same as the OEM Montauk console. 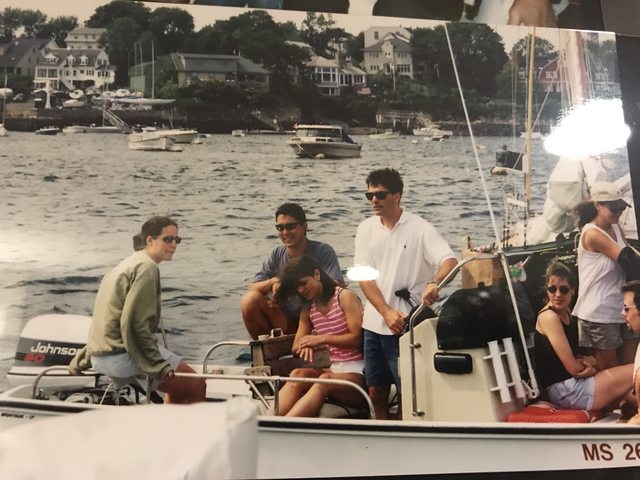 The boat served me for several years with a Johnson 110hp, with 90hp decals so the Whaler police didn't come after me. I later sold it and upgraded to a larger boat.

My favorite Whaler has always been the 15 center console and I had the fun of running one for a couple years back in the day. 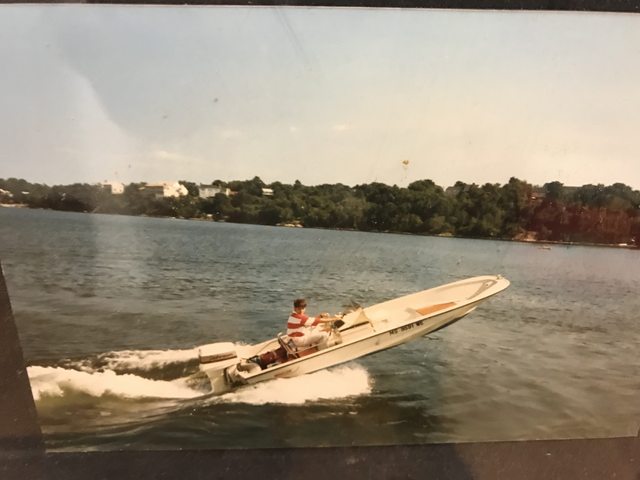 Sorry to bore you, but I just found the pics tonight and had forgotten about them.

by Masbama
Not boring; pretty darn cool. Thanks
All times are UTC-04:00
Page 1 of 1
Powered by phpBB® Forum Software © phpBB Limited
https://www.phpbb.com/