Pump switch has no auto option

Pump switch has no auto option

On our 2007 Outrage 210 the bilge pump switch is only a two way (ON or OFF) while the owner's manual says it should have an AUTO option also.

Is [the use of ony a two-position switch in this particular boat] because the pump and float switch is probably wired directly to the battery so [it is] always in Auto?

Or, is my setup wrong?

The switches are all factory so I suspect the former. If it is then I guess the float switch is dead, as I've put plenty of water in the bilge when cleaning it out and the pump did not automatically start. :(

Presuming a dead float switch, are there better options than the factory-fitted one?
Top

I don't know anything about the factory bilge pump setup on your 2007 Outrage but I do have a suggestion. When I wired the breaker switch panel on the console of my Montauk, I added a second switch under the console for the bilge with on/off/auto positions. When running, I keep the three position switch under the panel set to "on". I can then control the pump as needed by simply flipping the off/on switch on the breaker pannel on top of the console. When moored, (if needed) I leave the switch on top of the console in the "on" position and set the switch under the console to the auto position. That way it only comes on when the float valve (electronic sensor in my case) indicates water levels have risen to the point requiring it.

The under console switch is mounted inside the top left corner of the door for easy access. I simply open the front console hatch to access.

It could be the pump has the "auto-sensing" feature. If so, when dash switch is in the "on" position, it is auto sensing for water and will discharge water once detected.

"Presuming a dead float switch are there better options than the factory fitted one?" Yes, there is. I am using the Johnson Ultima switch. It has no float and senses water electronically. I am on my third season and have no problems at all besides keeping the sensors clean of growth. I keep my boat in salt water and stuff grows on it which will keep the sensors moist and trigger the pump. A once a week wipe does the trick. 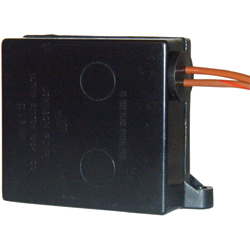 Thanks guys. I know I should have checked the float switch when the boat was here between January and April. but I forgot.

Pump works fine, so when I'm next at the boat I'll add some water to the bilge to see if the float switch is working. I don't think it is, as I added a lot of water when I was cleaning the boat when it was first delivered to us, and I pumped it out using the [manual] switch in the console.

I'll see what float switch options are open to me.
Top

It is impossible for any reader to know how your particular boat has been constructed and how its cockpit sump pump is installed and wired. You can find the original wiring diagram for your boat at

The wiring diagram (see link below) indicates that the sump pump is always able to run if the float switch is closed and its 5-Ampere fuse is not open. The wiring diagram indicates that the dashboard switch labeled BILGE PUMP will illuminate whenever the pump is running, no matter if operated by the dashboard switch or the float switch.

I don't consider this arrangement to be particularly good. When the dashboard switch is in the OFF position, the pump can still run under automatic operation from the float switch. The float switch could become jammed in the ON position even though there is no water to be pumped, allowing the pump to run continually until the Starboard battery was completely discharge, and if the battery switch were left in the BOTH position until both Starboard and Port batteries were completely discharged, and if the pump was not suited for running dry to damage the pump.

Again, this is what the wiring diagram indicates. What is on your boat is unknown to me.

I note that the circuit is fused at 5-Amperes. This suggests the capacity of this pump is rather low. I suspect that this pump is really intended to remove nuisance water that collects in the sump. I doubt that it could really expel a large volume of water at a reasonable rate of flow with only a 5-Ampere motor.

Note that the 5-Ampere fuse being open would also account for the failure of the pump to run automatically. Note that if the switch illumination works when the switch is operated, but the pump does not, then the fuse is good and the pump is bad.

The usual wiring of a sump pump with a control options for OFF, for manual ON, and for AUTOmatic operation with a float switch is described in an article I wrote. This arrangement usually uses a three position switch with one of the positions having a momentary action. See the REFERENCE section at