Installing trim tabs on a 160 Dauntless

Installing trim tabs on a 160 Dauntless

Every boat design is a compromise. For the 160 Dauntless, the designers gave a small boat a lot of beam, a huge 45 gallon internal fuel tank, and lots of storage space. The trade-off was that the boat is heavy for its size. Add to that the fact that the boat was designed in the waning days of 2-stroke engines and then powered by heavy first-generation 4-stroke engines, and you have a boat that's naturally a bit heavy in the stern and very sensitive to weight.

Back in 2003 when "Golden Daze" was new, I added a SE Sport 200 hydrofoil to the lower unit to improve trim after a rough day on the Chesapeake. For some years I thought it was the best modification I'd ever made to the boat. A few years ago I replaced the cable steering with hydraulic, and wondered whether perhaps that was the new best modification. Now I've added Lenco limited-space 4x12" trim tabs, and there is no doubt that this is REALLY the best mod to the boat! 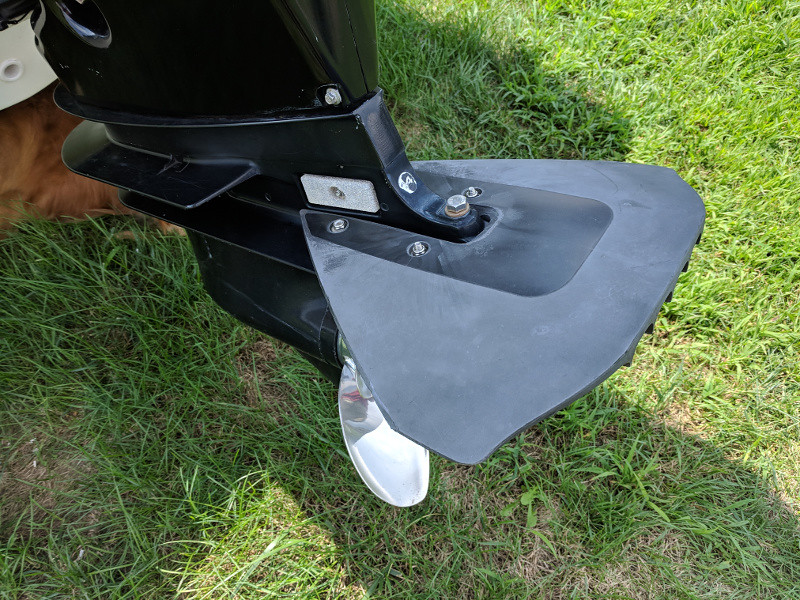 The SE Sport 200 hydrofoil served us reasonably well for 14 years or so, but it was never great. (Golden retriever photobomb at no extra charge) 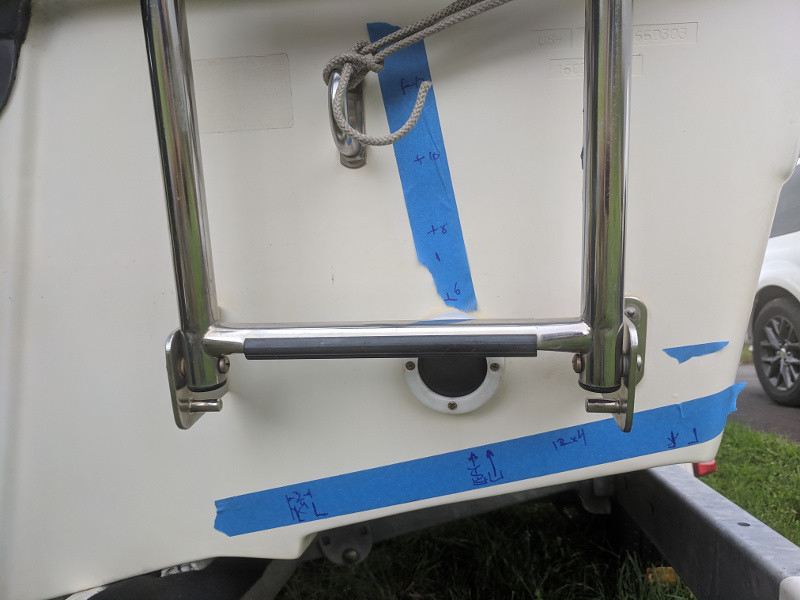 If you're going to drill 18 holes in your transom, you damn well better get it right the first time. In this case, I decided that the ladder wasn't going to clear the actuator cylinder, and I moved the trim tab inboard of the ladder. Lenco recommends that any hull strake be 4" away from the edge of the trim tab, so the shift a bit inboard put the strake right about in the center of the tab. 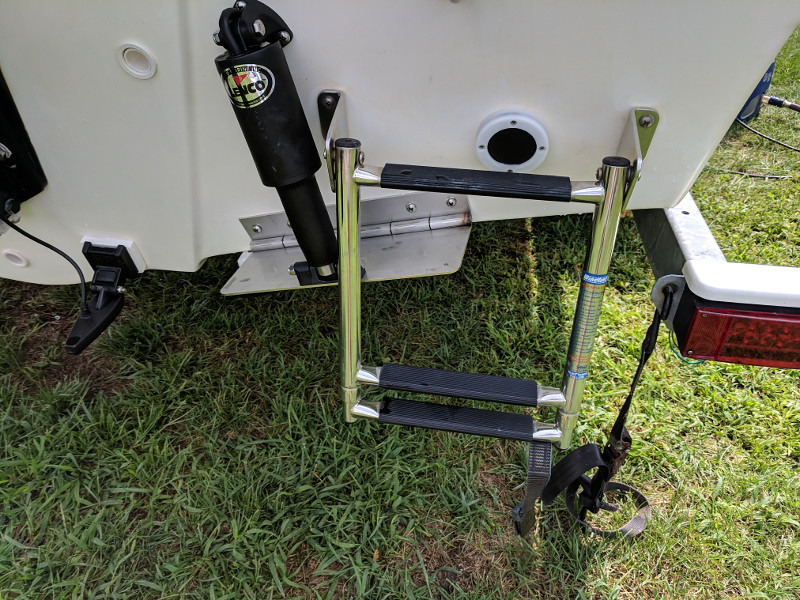 Here's the starboard trim tab installed, with the actuator just barely inboard of the ladder. At the time it seemed like the ladder was just going to clear the trim tab blade. I had to drill the holes somewhat over-size as compared to the Lenco instructions; the plywood in the transom is rock-hard and did not easily accept the mounting screws. I wondered whether it was actually WhaleBoard, which really wants to be tapped first, but according to my diagrams it really is wood. 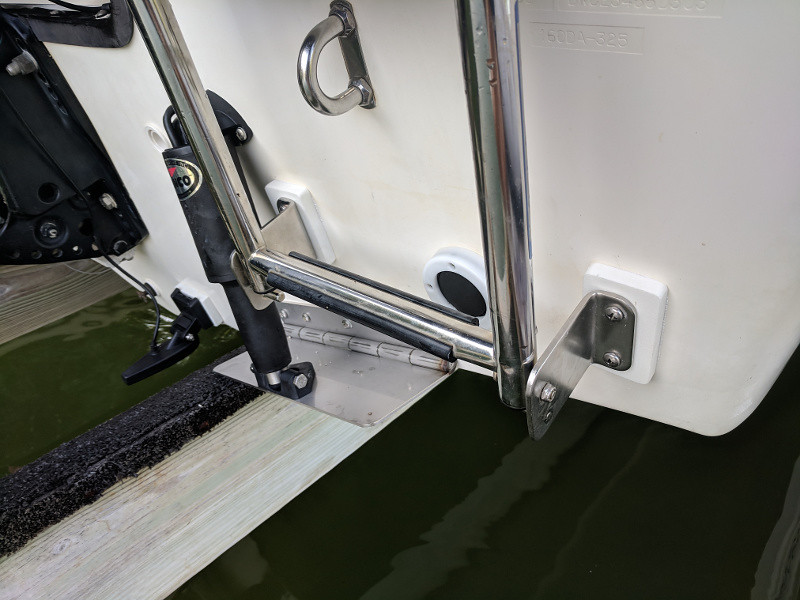 With weight on the swim ladder, it was crushing against the edge of the trim tab. Ultimately my solution was to add some 1/2" StarBoard standoffs to the swim ladder mounting brackets, replacing the 1-1/4" screws with slightly longer 1-1/2" versions. 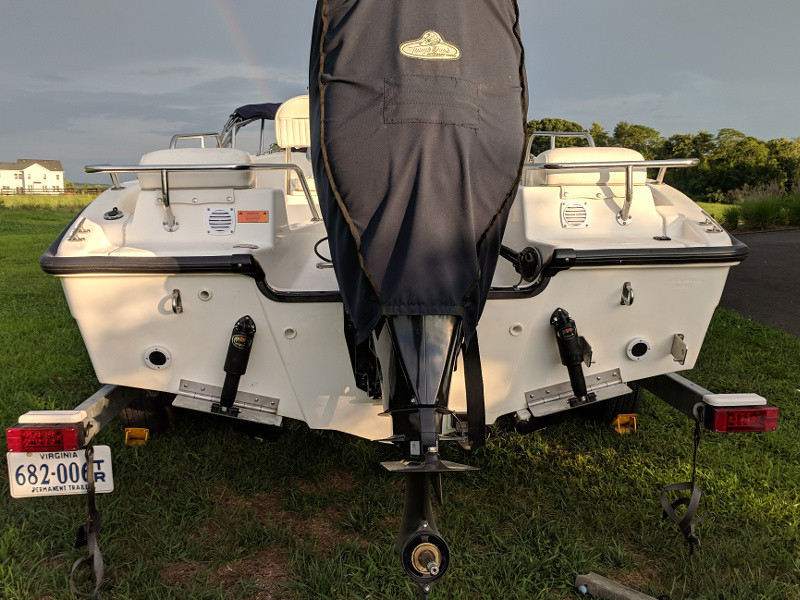 Mechanical installation completed. The wiring was pretty straightforward as well. (Rainbow photobomb at no extra charge) 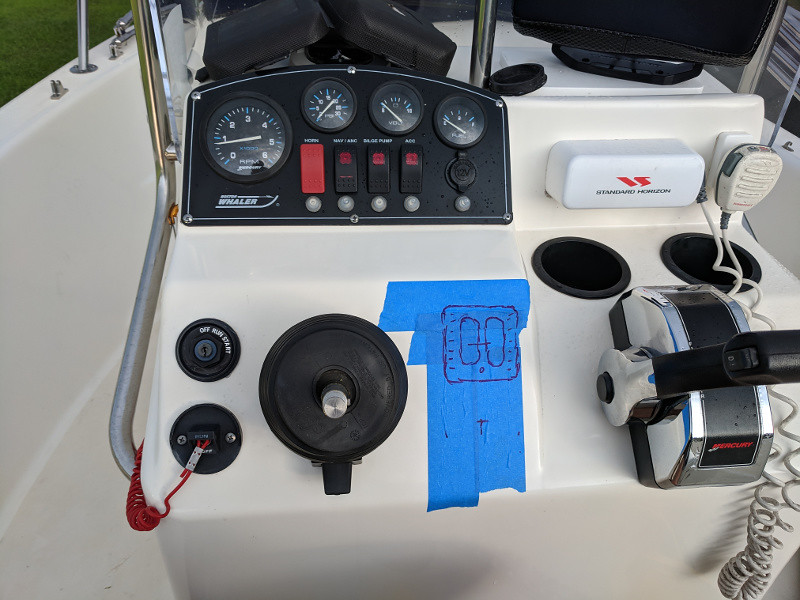 Now comes the hard part, or at least the part that's most visible to everybody! I must admit that the trim switch on the throttle was awfully convenient, so I tried to locate the trim tab controller as close to the throttle as I could get. That meant that it's somewhat behind the steering wheel and is not as convenient as I'd like, but on a small center console like this one there's not a lot of choices. I installed the switches with LED position indicators; the switches without indicators are a lot cheaper but if you spent the money for a Whaler in the first place you may as well keep your standards high! Somehow I didn't get a photo of the final switch installation, but it looks pretty much like you'd expect.

The results are fabulous. Minimum planing speed is reduced from 18 mph to about 15 mph, but more importantly, minimum "comfortable" speed with the boat solidly on plane and the bow down into chop was reduced from about 22 mph to 18 mph. She hops up on plane more quickly with a lot less bow rise, and up to about 32 mph the trim tabs do a great job flattening out the ride. Above that speed they're no longer useful, and when fully retracted they have no noticeable effect on boat speed.

My usual casual cruise speed is about 22-24 mph, and with the trim tabs extended "3 dots" I get a nice flat ride that cuts nicely through light chop or boat wakes. An unexpected bonus is the ability to trim port-to-starboard; I guess I never noticed before how shifting passengers changes the lateral trim, but now I can just correct it. The other really nice feature is the de-coupling of boat trim and engine angle; now I can trim the engine for neutral steering effort at all speeds where previously anywhere below 25 mph the down-trim on the engine made turns to the left much more wheel effort than turns to the right.

I did notice that when fully loaded (7/8 tank of fuel and 5 adults) I could not get the boat on plane with the trim tabs fully down; the extra drag was just too much. I had to raise the tabs most of the way until she was up on the step, and then trim her as desired. The 2003-era Mercury 115 4-stroke (with the Yamaha F115 powerhead) is reasonably quiet, very fuel efficient, and has been very reliable, but a torque powerhouse it is not.

Overall, I couldn't be happier with this upgrade and I wish I'd done it years ago. For those of you running a 160 Dauntless and struggling with trim, I can't recommend enough that you go ahead with the Lenco limited-space trim tabs. You won't be sorry.

ASIDE ON A DIFFERENT TOPIC: I just switched to a four-blade propeller which is supposed to lift the stern. The overall performance [of the DAUNTLESS 16] is better [with the new propeller]. I think I am seeing less bow rise, but bow rise is still there from 10- to 18-MPH. [This will be a good topic for a new thread in PERFORMANCE. This thread is in REPAIRS and MODIFICATIONS and is discussing the installation of trim tabs.--jimh
2001 Dauntless 160
Virginia Beach
Top

Great write up. I added trim tabs to my Revenge. It now runs like a different boat and has no more lean to port.
Top

The Bennett Bolts trim tabs do physically fit my Dauntless 16, but I do not have the actuators wired yet. It doesn't look like they will require spacers under the swim ladder.

I just installed the Bolt trim tabs from Bennett (12 x 12) on my 210 Outrage. [There was a problem with the stainless steel screw fasteners supplied with these tabs.] I think Bennett got a bad batch of stainless steel screws from China, and one package of them wound up in my box.

The first set of screws worked fine with the prescribed pilot holes in the transom. The other side was a different story. I spotted the hole locations, drilled to specification, and the first four screws broke off before bottoming out on the tab surface. I wound up relocating the tab by 1/8" and drilling new holes slightly larger and used the same-size 316-grade stainless steel screws purchased from McMaster-Carr with no breakage.

No worries; now I am also a newfound firm-believer in trim tabs. I just regret drilling holes in my boat and then having to fill them up again.
Top

FRANK--thanks for the narrative on your installation. You should report this problem with the low-strength screws to Bennett. Let them know they sent sub-standard quality fasteners.
Top

Thank you for writing this upgrade. I've been wondering why my 160 Dauntless seems like an elephant and bow high when getting on plane. I'm not going to do this myself and will have someone do this for me. Can you list out all the parts requires for this upgrade? Is the switch included with the kit or it has to be purchased separately. Also, the wiring comes along with the Lenco limited-space 4x12" trim tabs? Thanks!
Top

It's pretty simple as you only need two things. The trim tabs come as a set and include the mounting hardware and the cables. You have the choice of electro-polished or not Here's an example (I tend to get a lot of my boating supplies from defender.com but there are plenty of suppliers). https://www.defender.com/product.jsp?na ... id=1951814

The second thing you need is the control switch. They come with or without LED indicators and while the LED one is quite a bit more expensive it's really nice to be able to easily see the trim tax positions. The LED switch will also automatically retract the tabs when the ignition is turned off. https://www.defender.com/product.jsp?na ... it-(single)-with-leds&path=-1|2331321|2331349|2331354&id=3729945

Other than that all you need is some 3M 4200 or other sealant for the mounting screws, some cable ties for the wiring, a drill and a hole saw. But if you're having it done I'd think you could rely on the installer for all that.
2003 160 Dauntless Golden Daze
Top

Thanks Bob! I think I can manage this after seeing a few YouTube videos. Where do you run the cables from the console to the back? Through the same run as the hydraulic steering hoses?
Top

Yes, run the cables through the starboard rigging tunnel with the steering lines and the battery cables. I also recently rewired my 12V accessories; I had previously pulled a +12V supply from the gauge cluster, but now I ran a dedicated wire from the main 30A breaker to power the trim tabs, GPS/fishfinder and VHF.
2003 160 Dauntless Golden Daze
Top

Thank you very much Bob! I am trying to understanding your comment:

"I had previously pulled a +12V supply from the gauge cluster, but now I ran a dedicated wire from the main 30A breaker to power the trim tabs, GPS/fishfinder and VHF."

You wired the trim tab switch into the on/off switch for the two batteries? Later you removed it and install a 30A breaker?
Top

Let me clarify. The boat's electrical system originally had an 8ga wire from the positive battery terminal to a 30A circuit breaker. From there, a wire (10ga I believe) ran up to the instrument panel and jumped across all the panel breakers. I originally pulled off the accessory breaker to feed the VHF and GPS and sonar and later the trim tabs. The ground wire was more or less similar.

Now I've pulled a new 8ga positive wire of the 30A main breaker and a new 8ga negative wire of the main ground bus bar, and all the accessories are fed from that. As they all have inline fuses, no additional circuit breakers are needed.
2003 160 Dauntless Golden Daze
Top

In regards to the screws, the manual states not to use a power screwdriver to install them but their online video shows one being used.

I used a screw gun as it takes a lot of strength to get them tight and it is about 30 screws. Using the correct bit in the driver and backing off the clutch of the screwgun, most of the tab screws became chewed up anyway when the screw bottomed out.

I used the correct odd sized drill bits for the pilot holes.

If I ever have to remove these, it will be a bear.

Also, if I ever installed another set I would source another set of SS screws before hand.