I'm a Chesapeake whaler (85 Montauk) but I have been spending more and more time in the beautiful South Carolina low country and may retire there.

For the Charleston crew: is it possible to circumnavigate Kiawah Island?

When I'm down there I see lots of boats on the Capt'n Sam's Inlet side of the Kiawah River, and I wonder how they got in there, since the inlet seems to be pretty shoaled-up. Did they come around the back side at high tide or come in through CS's inlet?

A Kiawah circumnavigation is entirely possible in a Montauk. I've done it in an 18' Outrage and a number of times in a 15'.
My route usually takes me out Stono Inlet, hug Kiawah in the Atlantic, shoot Captain Sam's Inlet, follow the creek until you travel under the bridge leading to Kiawah Island, and follow the Kiawah Creek/River back to the Stono.

The area past the bridge is mostly flats/shoals, but there are ways around and through the area leading back to the Kiawah River.

It looks a lot more daunting than it really is. Most people make the mistake of trying this first at high tide, but if you don't have GPS tracks to navigate by, there won't be a logical path in front of you.

Do it the fun way, plan to hit that shoal area around 2 hours after low tide. Plod your way through slowly, and if you make a mistake, turn around and try another way. Keep your GPS on, log the track, make mental notes of depth, and you'll be set to blast through there whenever you'd like.

X2--but there is a bridge to navigate under so watch the tee-top. The Stono entrance can be really tricky with all the shoals but with a small draft should not be a problem.
220 Outrage
250 Verado
Top

A little update - I made this loop a couple of times this summer in my 25 Revenge Cuddy. It's still a little tricky, but pretty simple overall.
Top

Thanks to all for the info. I had my Montauk in the Kiawah River this summer, but didn't have my bottom machine on the boat so I didn't try going through the flats. I will definitely give a try some other time.
FBN
Maryland and South Carolina
1985 Montauk
75 Yamaha Four Stroke
Top

Yep, I was actually near there on Labor Day too. You'd be surprised, a 25' with twins has a deceptively shallow draft.
Top

How much water did you show in the "flats" area? The NOAA chart for that area (http://www.charts.noaa.gov/BookletChart ... Charts.htm, #11522) makes it look pretty scary!
FBN
Maryland and South Carolina
1985 Montauk
75 Yamaha Four Stroke
Top

fly by night wrote:How much water did you show in the "flats" area? The NOAA chart for that area (http://www.charts.noaa.gov/BookletChart ... Charts.htm, #11522) makes it look pretty scary!

I'll have to take a look at my chartplotter this weekend and see if it has logged that data, but from memory I recall seeing 2.5-3' at the shallowest point, and that was probably 1.5 or 1 hour on either side of high tide.

That sounds treacherous, but I'm sure I wandered slightly outside of the very-narrow channel. Someone has attempted to mark said channel with some PVC, but it's not intuitive, and I'm wouldn't be surprised if the they were a casualty of Irma. Still, the skinny-water part is a very small part of this loop, and if you idle through with an eye on your depth, it's really not so bad.
Top

What about this year?
Top

What about this year?

I saw this post and decided to make the loop again this Sunday before pulling my 25' Revenge-Cuddy out of the water.

I didn't do a very good job documenting everything, but I suppose I could pull a GPS track off of my chartplotter if someone so desires.

Anyway, we hit the flats area around 2 hours after high tide. The tide forecast wasn't a remarkably high tide at 5.36.
Someone has either attempted to mark a channel or mark the oyster beds, but I didn't find them very informative...(you can barely see them in the below picture) 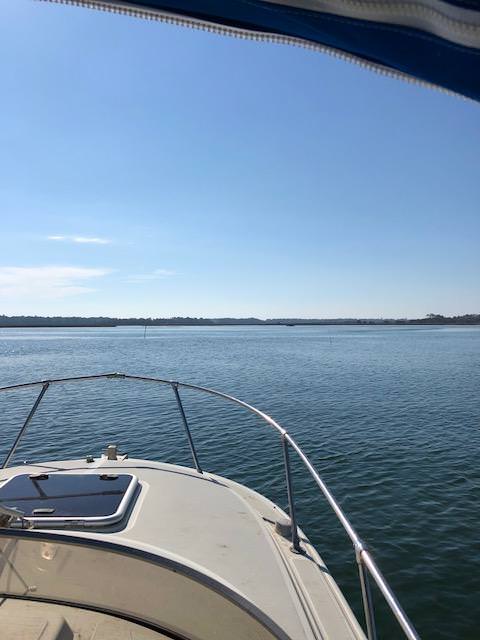 I don't mean to get all zen in this post, but the majority of this route's channel follows a logical flow. If you've spent enough time in the lowcountry, you'll likely be able to point out the channel of a river or creek without a chart, sounder, or markers. The markers here attempt to show where some less-than-logical oyster beds are, but if you take a narrow view of the route that led you to this point...and continue on that path, you'll likely be just fine.
Still, I showed about 3' of water at the lowest part. I may have not taken an optimal route, however. 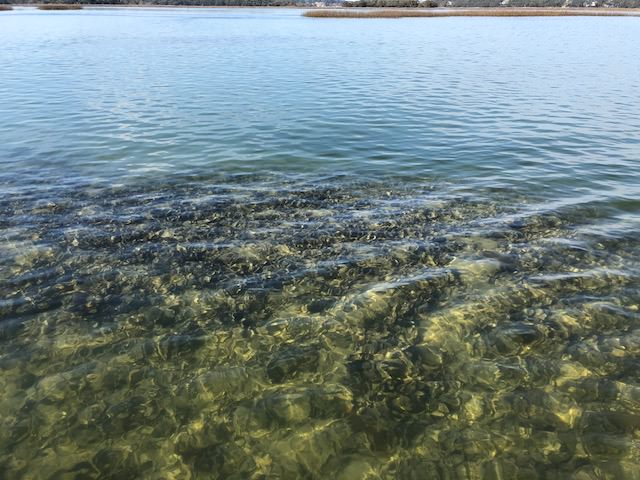 Regardless, until you've got this area memorized, I'd certainly advise idle-speed.

The flats re-converge into a creek (still Kiawah River, officially...I think) that passes under Kiawah Island Parkway. This part of the river isn't without hazards, but it is mostly deep at 10'+ in most areas.

It's almost always easier to leave an inlet than it is to return to one, so I recommend routing so that you depart from Captain Sam's Inlet rather than trying to read the breakers trying to enter. As is relatively typical of a sandy inlet, the center of what appears to be the channel will often be shallow, and you'll need to divert south as you exit the inlet/pass the breakers.

We were gifted with a beautiful day, and it was no rougher in the ocean than it was in the river. 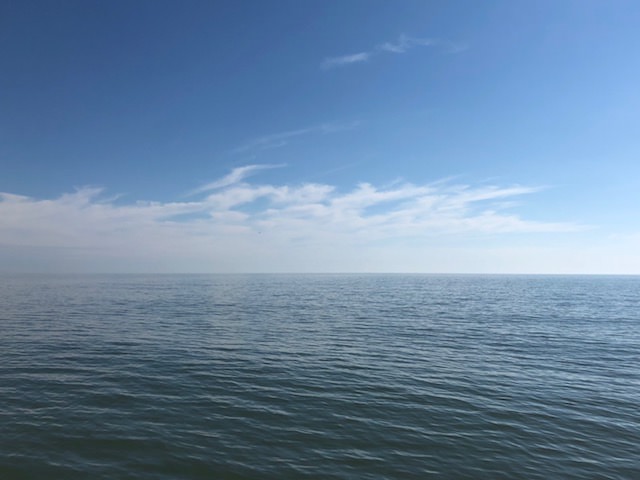 And just for fun here's a .gif of Captain Sam's Inlet I made using Google Earth historical data. The northern spit of land has been proposed for development, and I made the gif to illustrate the frequency/scope of its changes a few years back.

Thank you very much for the information. I have also looked at the area in Google earth and transposed waypoint to my GPS to help show where the channel through the flats is. (see yellow track on attached jpeg) I would really like to see the track through the flats from your GPS, if it isn't too much trouble. You can get a pretty good idea where the channel is from GoogleEarth, if you pick your image.

I will give it a shot when I am down there this spring.

[In response to a recent post that was really just SPAM from a Pakistan IP-address that has been deleted.]
What a strange choice of forum, thread, and method for spam.
[Yes, but at least it revived a very interesting thread--jimh.]
Top
Post Reply
13 posts • Page 1 of 1