I'm toying with the idea of trying other props to see how they impact the speed of my 15' Whaler SuperSport and after running the calculations several times in both the Continuous Wave and Mercury calculators, I come up with prop slip numbers that leave me puzzled. Below are the two calulators, Mercury prop calculator on the top and Continuous Wave on the bottom. 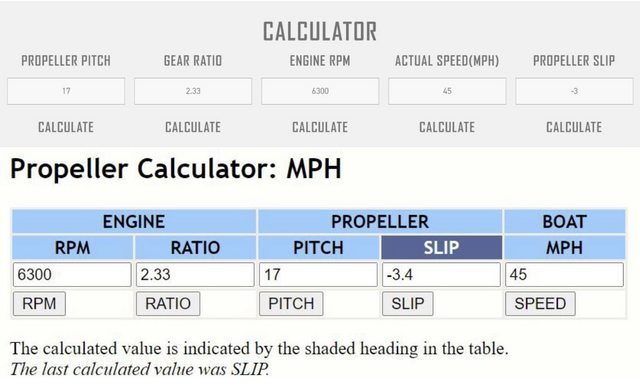 When looking at the data, it shows my boat having a negative slip, which isn;t possible. Here's how I've done the testing.


SPEED and location tested. GPS speed on my Garmin plotter and also a separate GPS running Navionics 45 and 45.1MPH were the recorded speeds.
1. Salem Harbor at the end at slack high tide so there was moving water to influance and there was no perceivable wind on the day tested. The run was a "back and forth" average which was within 2/10ths of a MPH.
2. RockHaven Lake in Maine, again no current and no perceivable wind. Speed was within 1/10th of a MPH on a back and forth run over the same location.

Engine RPM
The Yamaha F70 was turning 6300RPM which is on the rev limiter, so it cannot turn any faster in both cases above.

Gear Ratio - the F70 runs a 2.33 gear ratio, which is confirmed by Yamaha specs

Propeller pitch - the current prop was purchased new from Powertech propellers and is a RAF3 Stainless in a 17". I've confirmed this by looking at the information on the prop.

What is strange is my prop slip number is negative in both calcualtors (-3 and -3.4%). I'm not questioning the calculation between the two, but the fact that it's negative.

The boat in the test was carrying about 8 gallons of fuel, myself as the driver and roughly 100# in gear, so a very light boat. The motor is on a jackplate raised a full 6" above the transom lip. The motor was also tilted to the max trim position, so there is very little boat to water contact. I've talked with other 15' owners and I'm told an SCD18" or 19" pitch should provide me a high top end speed.

The only wildcard would be a prop that was mismarked at the factory and is possibly a taller pitch, but even if it's an 18" pitch, then slip is still only 2%. I am going to pull the prop and measure the pitch over the weekend to confirm the pitch.

For me this isn't about having the fastest 15' Whaler, it's more about dialing in everything to perfection. The boat spends most of it's time in the sub 30mph range.

The calculation of SLIP producing a negative value is most likely because the propeller pitch was understated. Modern propellers are generally not a constant pitch across the blade, so the stated pitch is more an index into the total effective pitch of the propeller. The addition of cup on the blade edges will also tend to cause the propeller to act like it has more pitch.

Adding 1-inch to the propeller pitch in the entry in the calculator will usually put the SLIP back to a positive number, as you have already commented.

Also, some propeller are perhaps designed with the intent that they would be run at very elevated mounting heights and be operating in aerated water. The actual pitch of the those propellers may be larger than the stated pitch to account for the lower thrust produced by moving aerated water instead of solid water that will occur with a high engine mounting height. If the propeller runs in solid water, it will act more like the real pitch.

UPDATE: I added a comment to the propeller calculator regarding negative values of calculated SLIP.
Top

Yes, I did notice a bit of cup on the blades and the additional lip does impact the overall prop pitch.