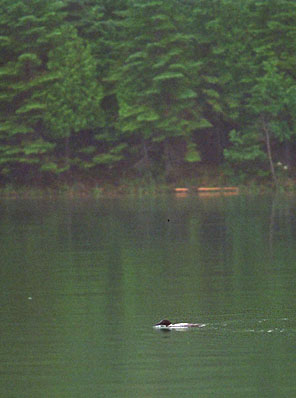 I wanted to say something about loons, but John McPhee had already pretty well summed it up when he wrote:

"We had hoped to see a moose even by now, but none has yet appeared in the lake, stream, or river. Meanwhile, the loon will do. He is out there cruising still, in the spiralling morning mist, looking for fish, trolling. He trolls with his eyes. Water streams across his forehead as he moves along, and he holds his eyes just below the surface, watching the interior of the lake. He is gone. He saw something, and he is no doubt eating it now. When he dives, he just dissappears. As a diver, there is nothing like him. Not even mergansers can dive like the loon. His wings close tight around his body, condensing everything --feathers, flesh--and he goes down like a powered stone, his big feet driving. He is known as the great northern diver. He can go two hundred feet down. He can swim faster than most fish. What he catches he eats without delay. His bill is always empty when he returns to the surface, and fifteen fish might be in his stomach. Because loons eat trout and young salmon, sportsmen (so-called) have been wont to shoot them--a mistaken act in any respect, because loons eat as well the natural enemies (suckers, for example) of salmon and trout.

"He is up again now, not far from where he dissappeared. When a loon dives, you never know where to look for him next. In what seems no time, he may break the surface far down the lake, or he may come up where he made his dive. This one is not about to go far. He is too interested in us. He cruises now with only his head and neck above the water--his conning tower. If something scares him, he can swim with only his beak out, a straw in the air--invisible if there's a ripple on the lake. Now his body is up again, and he laughs. If the laugh were human, it would be a laugh of the deeply insane. The bird's lower jaw opens and claps shut five times in each laugh. If, from where you watch, he is swimming in silhouette, you can count the movements of the jaw. He can laugh two or three ways, and he can also squeal like a puppy. But it is with another sound--a long cry in the still of the night--that the loon authenticates the northern lake. The cry is made with the neck stretched forward, and it is a sound that seems to have come up a tube from an unimaginably deep source--hardly from a floating bird. It is a high, resonant, single unvaried tone that fades at the end toward a lower register. It has caused panic, because it has been mistaken for the cry of a wolf, but it is far too ghostly for that. It is detached from the earth. The Crees believed that it was the cry of a dead warrior forbidden entry to Heaven. The Chipewayans heard it as an augury of death. Whatever it may portend, it is the predominant sound in this country. Every time the loon cry comes, it sketches its own surroundings--a remote lake under stars so bright they whiten clouds, a horizon jagged with spruce.

"His flesh is tough. The Indians boiled him until he fell apart in shreds. He looks like a big duck, a small goose. His back, in summer, is a tessallation of white squares and dots on a black field. His head is black and forest green, and so is his neck, which is surrounded with vertical white stripes. His eyes are red. In the air, he could be part flamingo--long neck extended, feet behind, back humped. His maximum airspeed is sixty miles an hour, and his stall-out speed must be fifty-nine. Anyway, he scarcely slows up, apparently because he thinks he will fall. He lands on his stomach (not feet first, like a duck), and at sixty miles an hour, his landing is something to see. Ashore, he flops helplessly, vulnerably. His nest is a foot or two from water. Takeoff is considered a problem for him. With, say, ten fish in him, he needs a runway at least a quarter of a mile long. He runs over the surface of the lake on his big feet and beats the water with his wings. Heavily, he goes into the air. With fifteen fish in him, he has no chance whatsoever. For takeoff, he needs, as well, a breeze to head into--sometimes a pretty stiff one. From a calm lake--even if he has an empty stomach--he cannot fly.

"He sleeps on the water. St. Nicolas magazine, in 1910, told a story of a man--a white man, a summer camper--who in early morning paddled across a northern lake, silently approached a sleeping loon, and captured it with his hands. The article was illustrated, and showed the man reaching for the loon--from a bark canoe."