"Driving down the fronts of the bigger waves, the dark blue-green water of Lake Huron comes boiling out white under the bow, making noise like a steam locomotive."

This morning there is quite a breeze blowing into Goderich Harbor. We all wonder just how much breeze there will be offshore, if there is already 15-20 knots blowing in the harbor! The skies are overcast. We leave Maitland Marina about 0815, with Voyager II the lead boat. (We rotate this honor each day.) The large seawall to the south of the harbor keeps us in its lee as we motor out. On Serenity we watch as Voyager II clears the end of the breakwater's shelter and takes the full effect of the breeze and the 4 foot swell. Voyager II heads up into the southeast to raise sail; we on Serenity turn north, motoring away from the seawall. Ray, the Skipper, has a great idea: we will raise sail in the lee of the seawall after we gain enough room to make a one-hundred-eighty degree turn and head back to the southeast--no bouncing around in the Lake for us. A haze hangs over the coast despite the fresh breeze, and as the two boats turn on opposite courses, we are rapidly losing sight of one another.

With growing crew coordination, we raise the main with one slab reef and set the 100% jib, and Serenity leans into her first real sailing weather of the voyage. Voyager II is now temporarily out of sight in the haze; we turn to the southwest, reaching out into Lake Huron to where we have last seen her. In a few seconds we pick her up dead ahead. She is motorsailing back toward us with a double-reefed main and no headsails. For a few minutes the two boats converge on opposite tacks. I am struck with the feeling that we are like two racers, circling, turning, and pacing each other before the start of a match race; we are still getting ready for today's sailing--it hasn't started yet. Ray yells for Bob to hail Voyager II on the radio and tell her to "get on course and get going!" Bob repeats the message to the other boat with the exact inflection and emphasis with which Ray has delivered it! The transmission is made on Channel 16, and for this breach of radio procedure we draw a rapid rebuke from the Canadian Coast Guard radio operator. Later it will be comforting to recall that someone out there was listening!

Serenity jibes around to the rhumb line course, putting us on a dead run with the freshening southeast breeze. It is now past 0900, and the process of getting under way seems like it has taken much longer than it should; we have wasted too much time and effort getting out and getting together. With the long stretches we want to make each day we need to be more efficient with our energy. This lesson will come back to us with greater impact in a few hours.

Motorsailing downhill at 6 knots reduces the apparent wind on the boat to 10-15 knots. The following sea are steadily building. Weather radio reports waves "one to one and one-half metre, possibly higher due to shore effects", an observation with which we are in agreement. Voyager II begins to slowly pull away from us, so we shake the reef out of our high-aspect main. Being on a dead run, the 100 jib is pretty much stalled in the shadow of the main; lacking a whisker pole, we try using the spinnaker pole to keep the jib going, but it is much too long and we finally settle for moving the lead farther aft as the best we can do to improve the trim. We add almost a knot with the full main, so we kill the Yanmar (diesel engine) and fall in behind Voyager.

Having had the noisy diesel running for almost all of the previous two day's "sailing", the sudden quiet is welcome. The sun is rising behind us, hanging in a mid-June sky filled with white clouds, but even with the help of a still-growing 20-knot breeze, it seems to lack the power to burn off the haze which obscures the Ontario shoreline one mile to our east. It has been blowing steadily out of the southeast for about twelve hours, and the Lake, which had been so calm the day before, is now a rapidly maturing sea, rhythmic waves that continue to grow in height. Serenity's broad sternquarters give the six-footers plenty of area to push on, and, coupled with the press of the full mainsail and jib, the S-2 is charging northward at over 6 knots. Driving down the fronts of the bigger waves, the dark blue-green water of Lake Huron comes boiling out white under the bow, making noise like a steam locomotive. How pleasant and powerful the boat feels. It has a regular cadence and is being driven hard enough so that there is no roll or yaw at the bottoms of the troughs. The sun is now bright and warm, and the wind over the boat still strong enough to keep everyone cooled off. Although still fairly close on the shore, in about 30 to 50 feet of water, the feeling is definitely one of "deep water sailing".

Voyager II must have finally shut their engine off, too, for we are about to overrun them. Their main had inadvertantly been torn below the first reef point by the boom vang collar, and fearful that the tape patch job would not hold in this strong air, they are keeping it reefed. For Serenity to keep pace, we begin to sail a zig-zag course, footing off out into the Lake a few hundred yards, then sailing, sometimes by-the-lee, back up to Voyager. Sailing faster but farther, we keep our position just behind her.

Whoever it was who first described sailing as "hours of boredom separated by moments of panic" certainly knew his topic. Earlier, when we fiddled with the sheet lead on the jib and moved it aft, we had temporarily borrowed the starboard snatch block to serve on the working sheet. When the starboard block is reinstalled and the lazy sheet rove through it, the sheet is lead foul through the lifelines. This little mess awaits us on our next tack over to port.

Around 1100 hours we decide that we ought to get on a port jibe, as we are too close to sailing by the lee on starboard. Naturally, jibing in a 20 knot breeze and 6 foot following sea is a little risky undertaking. We decide to play it safe and come about. We ease off the preventer, and put the tiller down to leeward. As soon as we come about, we discover the new working jib sheet is rather elaborately twisted through the starboard lifelines. There is something about slack jib sheets, a 25 knot apparent wind, and the pitch of the boat in now six-foot-plus headseas, which creates a powerful and unstoppable engine that winds the lazy sheet onto the working sheet faster than an eight year old boy can snag a fishing reel.

From the placid boredom of starboard tack downwind, we are instantly transported to the panic of a flogging jib, a pitching boat and a boatspeed relative to our companion, Voyager II, of minus six and a half knots. When mistakes come, they tend to come in bunches. A loose end of the leech rope knots itself firmly around one the stays. Just as Bob has cut that little tangle free, and I am about to clear the last wrap off the working sheet, the skipper yells: "Drop the jib!" He's got the engine back on, providing some headway, and also creating a substantial noise over which the crew tries to point out the nearness of the solution to the foredeck problems. But arguments fought from a wet, pitching foredeck against a skipper in the cockpit with tiller and throttle in his hand are almost always decided in the skipper's favor. So it is here. The civility and genteel behavior, which had marked our morning's sail, disappears faster than a cold six-pack after a hot Wednesday night's race, and in its place comes the profanity one normally reserves only for powerboaters or their huge wakes.

We eventually find ourselves back on course, and with residual benefits: the downed jib creates a nice little pillow in the bow pulpit in which I can collapse and assuage my wounds--wounds both physical, from wrestling with the flogging sails and sheets, and emotional, from the loss of momentum in our northern voyage.

With us on Serenity more or less sailing backwards in dealing with this distraction, Voyager II has been forced to come about and circle back to see what is keeping us. With things back under control, we resume our way northward toward our first course change, Point Clark. Had we been on schedule, we should have cleared the lighthouse about 1200; but we have wasted time and energy. 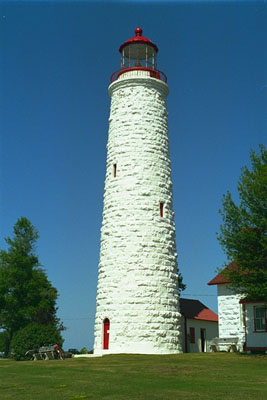 Less than an hour later, the 93 foot tall lighthouse appears on the still hazy coastline to our east. We are sailing fairly close to shore, a track chosen by Voyager II, and in order to clear the reef that lays ahead, we have to head up to close hauled, sail due west about three-quarters of a mile, and round a buoy. On Serenity we are again sailing with full main only, and, although this was giving us plenty of drive going downwind, beating out to the buoy with no headsail drops the boatspeed quite a bit. Rather than hoisting a jib, we kick on the engine (again) and round the Point Clark Reef buoy to starboard. On Voyager II the sailing spirit predominates, and we wait a few more minutes for her to claw her way offshore, clear the mark, and resume the lead and course.

It is lunch time now, and out comes the food and drinks. The sun is burning off more of the haze and overcast, and a few cumulus clouds are building to the south. The day is warming up, and the foul weather gear is coming off. The southeast breeze is holding steady, and the sea is now easing a bit as we make our way northeast in the lee of Point Clark. Our next milestone is Douglas Point, marked easily from the Lake by the enormous structure of a nuclear power plant dome and stacks. We are motorsailing again to keep speed up, and we are making about 6 knots on course 025. We all settle in for a pleasant afternoon on Lake Huron, with our destination, Port Elgin, only about two hours sailing time once we turn the corner on Douglas Point. The motion on the boat is easy, and the Skipper and I both go below for a nap. Bob is on the tiller, and Chris and Dave are relaxing topside.