I have read that there isn't much that I can do to get more power out of [that 1992 Johnson 70-HP outboard engine]. I would like to go faster in my Boston Whaler.

I have two 1997 MARINER 115-HP engines that I don't want to get rid of. They were super reliable when I had them in another boat.

I have been looking for a Yamaha 90 two-stroke-power-cycle outboard engine, but people are asking over $3,000 for them. Plus, I don't really want to get in [an outboard engine] which I don't know its history.

I'm guessing I would need [to also install] a jack plate in this case.

I love this 1988 Boston Whaler SUPER SPORT 15. I don't want to get something else.

Since I already have another larger engine, the cost to do the modification will be very low.

I rebuilt the 1988 Boston Whaler SUPER SPORT 15 boat several years ago. I have it the way I want it, and it's been with us since 1995. The boat was a dealer display model and was put into service around 1992.

Any recommendations would be greatly appreciated. Thanks.
Top

Hmm, didn't think about that, it would be more now as I currently have a 70, but that's a good idea.

You should search the archives on this site. A while back there was a member that went through the same process--successfully I might add. The additional horsepower resulted in much higher top speeds and necessitated the addition of some sort of skeg or fin on the bottom of the boat.
Top

[The thread has been moved to PERFORMANCE to discuss the re-powering and the effect of the added weight on the transom of the SUPER SPORT 15.]
Top

The c.1988 Boston Whaler SUPER SPORT 15 hull is a relatively light boat, and, accordingly, it is going to be sensitive to the engine weight on its transom.

The SUPER SPORT 15 was not designed for extreme over-powering and the faster boat speeds that will result. Exactly how the hull will behave at speeds greater than it was designed for is unknown to me.

The classic Evinrude three-cylinder 70-HP two-stroke-power-cycle engine you have on the boat now is probably the best all-round engine for the boat. The engine weight is light and the power to weight ratio is excellent. The Yamaha 70 and 90-HP engines are copies of the original OMC engine. The 90-HP has larger displacement. I don't know the exact weights of the 70- and 90-HP engines, but they are light-weight engines.

I would expect that a classic SUPER SPORT 15 with 70-HP should attain a boat speed of about 42-MPH. This is based on data from Boston Whaler. See

The effect of added engine weight on the transom is difficult to predict, except for the clear drawback of increasing draft at the transom and causing the weight distribution on the boat to become stern-heavy. These characteristics are often associated with unstable planing behavior leading to the oscillation of the bow up-and-down--called "porpoising." These oscillations usually occur at the highest planing speeds. On that basis I would expect that the classic SUPER SPORT 15 boat will probably become unstable at planing speeds that will occur with the 115-HP engine and its added weight.

Regarding the necessity of installing a jack plate: the installation of a jack plate will add additional weight at the transom, aggravating the already excessive weight of the bigger engine.
Top

Wellcraft wrote:...I have read that there isn't much that I can do to get more power out of [that 1992 Johnson 70-HP outboard engine.].

The classic three-cylinder 850-cubic-centimeter engine is often used in race boat categories where the displacement is limited to 850-cc. I would expect there are a number of enhancements available from the racing boat engine tuners that might improve the power output. For example, there might be some sort of raw exhaust pipes or larger carburetors that could offer a gain in horsepower compared to a "fishing motor" version of the engine as it came from OMC.
Top 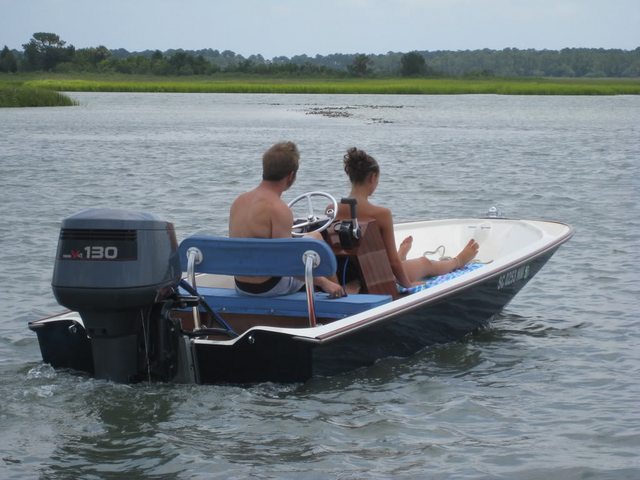 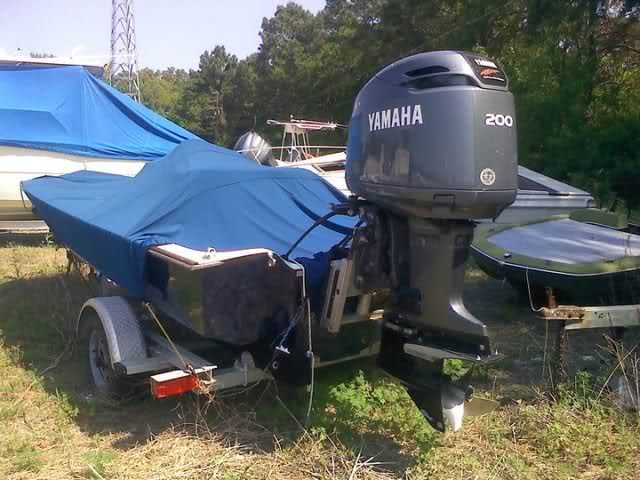 How fast are you trying to go? I'm running a 15SS with a 70 Yami and she'll hit 43mph, plenty fast. You go bigger than that and the weight starts playing a factor and I know some will say it's fine, but I run a 15gal tank under the rear seat and if I changed to a 320# motor with a jackplate and hydraulic steering, that'd a bit much in the stern. The Yami 70 2 stroke is a nice light 230# which I think is ideal.

The previous pics of the 130 is real, I believe the 200 was the lower pan and cowl placed on the smaller midsection for the pic.

I agree with the post above. I have the same boat and engine, a 1988 15 with a Yamaha F70. I know plenty of people who have wanted to get more speed out of a 15. And while I understand the fascination with having a little 'hot rod' on the water, the hull in its original design is just not meant for it. The boat with the Yamaha 130 pictured above had a running pad glassed onto the bottom, along with other major modifications. There have been people who've extended the running strakes (forgive me if that's the wrong term) to the stern, and a few other hull modifications as well.

As Jim mentioned, the 15 is weight sensitive. Along with compromised handling while underway, the great ride that the little 15 is know for, kinda goes out the window when you've added too much weight to the stern, and that nice sharp bow entry is in the air. The 'Central Rounded V' shape of the hull is just not conducive to high speeds. It also can become a safety hazard in anything but a straight line.

If someone was hell bent on getting a few more MPH's out of their 15, and didn't want to go through MAJOR hull modifications and costs, I would say an older 70 or 90 hp Yamaha 2-stroke with some motor modifications would be the way to go. I think there are still some people making high compression heads, pistons, exhaust-tuners, and reed cages for those things. But all that won't come cheap, and your longevity, and reliability of the motor will be greatly compromised as well.

I know of a couple people who have put the Evinrude 90 E-TEC engines on their 15's, and were happy. But they aren't cheap either, and you're back to 320-lbs of engine.

I think if money is a concern but you still want to play around with trying to get a few more MPH's out of your 15, you might look for a Yamaha 70 hp 2 -stroke. They were known as being very reliable, and powerful for their weight. You could install either a Bob's 5-inch manual jackplate, or try a T&H Marine Atlas Micro-Jacker 4-inch hydraulic jack plate. Try some different propellers to get the best performance out of your set-up. The addition of Bay Star hydraulic steering is a REALLY nice upgrade to a 15. It may seem excessive, but it's great once you have it. With a light load, the right propeller, and the engine at the right height, you should be able to get around 45-MPH, which is scooting in a little 15 and feels more like 55.

Good luck in whatever you decide.
Top

El Rollo wrote:If someone was hell bent on getting a few more MPH's out of their 15, and didn't want to go through MAJOR hull modifications and costs, I would say an older 70 or 90 hp Yamaha 2-stroke with some motor modifications would be the way to go. I think there are still some people making high compression heads, pistons, exhaust-tuners, and reed cages for those things. But all that won't come cheap, and your longevity, and reliability of the motor will be greatly compromised as well.

Yamaha 70 is a small displacement motor and not ideal for wicking up the HP and maintaining longevity. Hydro Tech has many parts at high cost for minimal increases in performance. You'd be better off jumping to a 90hp with the small additional gain in weight. Displacement is your friend for making more power.

I'd think a 90hp and a Jackplate would make the ideal setup.

On my 1986 15-footer I run a Mercury 90-HP three-cylinder two-stroke-power-cycle engine affixed to a powered jackplate with four-inch setback. I re-fitted the 1986 Striper to be Super Sport. My object in setting up this rig was to carry heavy weight, on occasion, and to have that reserve grunt when needed.

When I was young and stupid, (now I am old and stupid), just for a goof I mounted an Evinrude 125hp on my 18 foot aluminum skiff. The first thing it did when starting out fast was to pop a wheelie and almost flipped over backwards. After we changed our shorts we took off- slowly- and went about testing. Being a flat bottom boat it raised right up on plane and literally flew across the water with most of the hull out of the water. The day was fairly calm so the slight chop did not affect the ride at all. On a measured mile we clocked it at 55mph. I don't know what you consider fast but I can tell you that at 55mph fast is synonymous with scary. If the water conditions were bad that big motor would have been a definite liability.
Top
Post Reply
15 posts • Page 1 of 1