The Outrage 24 (in 1981) and later Outrage 25 (1982 to 1993) were the largest easily trailered Boston Whaler classic hull due to the beam being only 8-feet and the total weight being reasonably light for a 25-foot boat. At its introduction it was the largest hull in the Boston Whaler line. The initial literature stressed the ability of this hull to operate offshore and in rough seas.

The hull of the Outrage 25 is a moderate V-hull shape that appears to have evolved from the Outrage 22 design. The deadrise at the transom was increased compared to the Outrage 22 to be 18-degrees, based on an average of several measurement by various techniques and mentioned in Boston Whaler's 1981 catalogue. The deadrise on the 25-foot hull is greater than on previous hulls designs, This increased deadrise at the transom is said to improve the ride in waves, and at the time of introduction represented Boston Whaler's deepest V-hull design.

The deadrise at the transom is carried forward, increasing slightly amidship, and then increasing significantly at the bow. Whether or not the slight increase in deadrise from transom to amidship disqualifies the hull from being characterized as a constant deadrise design is debatable. V-hulls of this general type, carrying almost the same deadrise at amidships to the transom, are distinct from other hull designs which transition from a V-shape amidship to a much flatter bottom shape with very little deadrise at the transom. In those other hulls there is a very distinct change (decrease) in deadrise of the hull from amidship to transom. In the OURAGE 25 hull the change is small and subtle.

Around this time the designer C. Raymond Hunt was drawing many boats with V-hull shapes often described as constant deadrise, but Hunt (and his associates) contended that there were subtle but important changes in deadrise taking place and the characterization of constant deadrise was not appropriate to their designs. See a very detailed explanation of this at the Hunt website.

The 25-foot classic hull maintains the general style of Boston Whaler hulls of this period in having a runner or vestigial sponson on each side of the keel. These runners are thought to help deflect spray downward and outboard, and they contribute lift to the hull to help the hull reach hydroplane mode as speed increases. The line of the runners is carried forward, and then turns upward and inward at the bow stem, where the two lines meet and form the characteristic known as the Whaler smirk, from the visual resemblance of the appearance of the boat from head-on to a smile with down-turned corners.

The length to beam ratio of the outboard boat was 3.07:1, itself a classic ratio in hull design. With the addition of the Whaler Drive, the ratio increased to 3.31:1, becoming the highest length-to-beam ratios of any Boston Whaler boat in this era of production.

An option for larger console, later called the Super Console, was available, creating a wider and longer console.

The Outrage 25 hull was offered with several transom configurations. The standard hull had a wide notched transom that could accommpodate twin V6 outboard engines, and the maximum power rating was 300-HP. The standard hull gunwales widen at the stern, and two small storage compartments at each stern quarter are provided.

When Boston Whaler developed their Whaler Drive, that option was then available on the OUTRAGE 25 boat. The Whaler Drive is a large engine laminated and molded bracket bracket that was bolted on to transom of an OUTRAGE 25 (and other models), with the transom configuration changed from a wide-notch to a full transom with added stern deck. The Whaler Drive engine bracket included a large buoyancy box that was essentially an extension of the OUTRAGE hull. With a Whaler Drive the length of the OUTRAGE 25 increased by 23-inches, the weight increased by 250-lbs, and the cost increased by several thousand dollars. The maximum power rating also increased to 450-HP (twin 225-HP engines, about the largest available at that time) from 300-HP (twin 150-HP engines).

The 25-foot Outrage hull could also be ordered in "Sea Drive Blank" configuration. "Sea Drive" refers to a then available OMC outboard configuration which provided outboard engines with their own transom set-back bracket mounting, designed to bolted onto a flat transom rather than to be hung onto a notched transom. The Sea Drive Blank models have a full transom and a enclosed rear deck area. The Sea Drive engine(s) would be bolted onto the full transom, and rigging passed through a small access hole. The new rear deck has a large storage area in the center, along with two smaller storage areas at each stern quarter.

There was also an option for "Stern Drive Blank." This model would also have a full transom, and a new larger rear deck, with a new engine compartment cover encroaching into the cockpit. The buyer would fit his own sterndrive power to this hull.

While Boston Whaler did not offer boats with factory-rigged outboard engines or Sea Drive engines, they did offer factory-rigged sterndrive engine, with a choice of engine power and brands.

The aluminum tank was mounted on rubber cushions and mechanically retained in the cavity, usually by an aluminum bar over the top of the tank (or by some arrangement of straps). The tank was then foamed in place to prevent movement. The fuel tank was contained in a central hull cavity which was covered by a laminated and wood-reinforced deck that could be removed if necessary. In typical Whaler fashion, a unique arrangement of a clear access hole cover and a mechanical fuel gauge provided a very nice tank level indictor without using electrical gauges. The fuel tank was fabricated by Florida Marine Tanks. The OUTRAGE 24-25 models used two cross-linked 70-gallon fuel tanks to produce a 140-gallon total fuel capacity.

The Outrage 25 offered impressive offshore capability, yet its limited beam allowed easily trailering. The boat's shallow draft made it useful inshore, too, adding to its versatility. Although an open boat, it could also be fitted with a complete package of canvas, turning the foredeck and helm area into a very comfortable foul-weather cabin. The large bow compartment could accomodate over night sleeping under the cozy forward shelter canvas, especially if the deck level were evened out with a wood frame.

The Outrage 24 and later renamed Outrage 25 model continues the moderate V-hull with nearly constant deadrise begun in the Outrage 22. Boston Whaler chief designed Bob Dougherty implemented a model name convention scheme in which the odd numbers, 13, 15, 17 (originally 16), 19, and 21, refer to hulls with a rounded bottom. The model designators with even numbers, 18, 20, 22, and 24 (later changed to 25) refer to hulls with moderate V-bottoms. However, it appears that Boston Whaler marketing overruled this plan, and renamed the Outrage 24 as the Outrage 25, probably to make the boat more competitive with other brands model length descriptions.

The base boat with center console was the Outrage 25. The center console boat with a cuddy cabin was the Outrage 25 Cuddy. The 25-foot hull was also offered as cabin boat as the Revenge 25 Walk-Through. There was also a non-center-console version called the Revenge Cuddy that has the small cuddy cabin and the helm located very far forward on Starboard behind a small windshield. The 25-foot hull was also available as a Temptation model with Whaler Drive. In some years of production a sterndrive option was also available in many models. The 25-foot hull could also be ordered with a Whaler Drive option, which was primarily seen with twin engine installations. See the comprehensive model and production year chart in the Reference section for a more detailed breakdown of models and years of production.

Models of the 25-foot hull were also available from Commercial Products Division (CPD) in various configurations and trim.

The photographs below show the Outrage 25 and several other model variations. 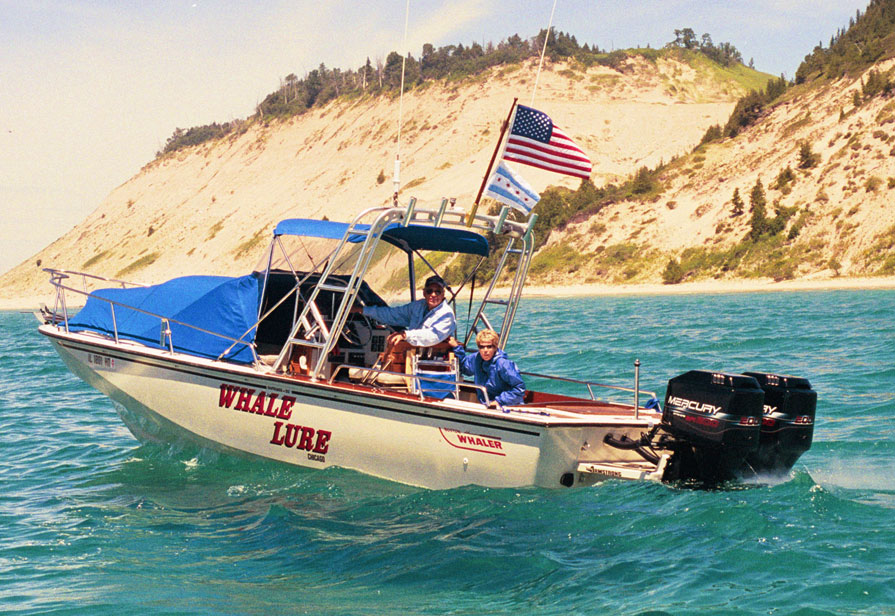 Fig. 1. A c.1986 OUTRAGE 25. WHALE LURE was ordered as a Seadrive-blank, and owner Larry Goltz added a Armstrong bracket, then rigged the boat with twin Mercury 200-HP engines. A custom-fabricated radar arch was also added . The Forward Shelter and Flying Top are from Wm. J. Mills & Co. This boat has the smaller center console and Reversible Pilot Seat. Photo by the author, taken at South Fox Island, Lake Michigan, in August 2002. 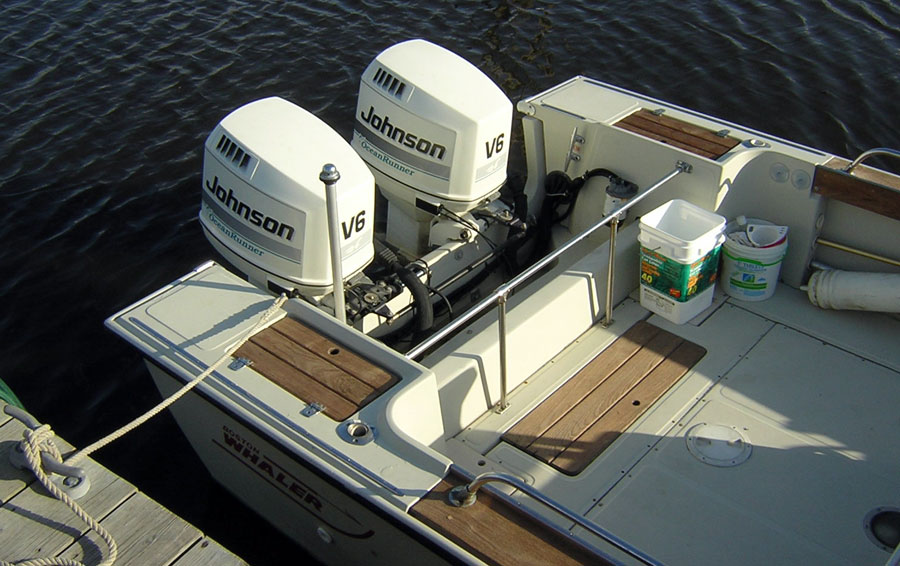 Fig. 4. The aft cockpit and engine splash well area of a notched-transom OUTRAGE 25 hull. Photo by the author, taken at Isle Royale, Michigan in September 2010. 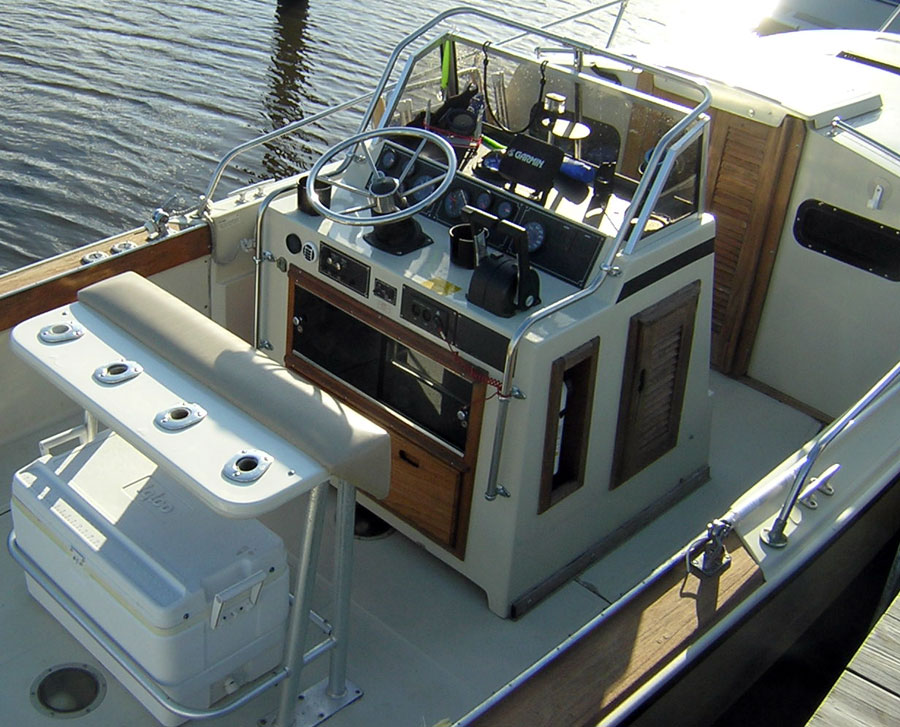 Fig. 5. Details of Super Console and Leaning Post seating, the standard arrangement for the OUTRAGE 25. Photo by the author, taken at Isle Royale, Michigan in September 2010.

This is a verified HTML 4.01 document served to you from continuousWave
This article first appeared June 2021.